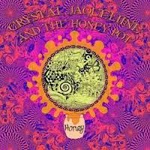 Crystal Jacqueline made her Fruits de Mer debut on a beautiful 7” last year, and now is time for a double 7” with The Honey Pot. Crystal and her partner Icarus Steel both also happen to play in The Honey Pot, so this is really not your standard split release with two wholly different bands, but the deal is more or less that they just thought what version of their band would be better for each song. The end result works splendidly, and that’s what matters anyway!

This double EP includes seven tracks one of them being an original. The rest are classic psych/prog rock masterpieces treated with enthusiasm, honor and skill. First we’ve got a very nice and mellow cover of Pink Floyd’s “Remember a Day” by Crystal Jacqueline. What a lovely song! The Icarus Steel original “It’s Raining” is a fast and short 60s styled psych rock number and does fine in this classy company. Great organ, wah guitar and male vocals on this one. “White Rabbit” must be one of the most covered 60s psych classics but I still always enjoy a new great version like this The Honey Pot one that has a twist of its own. I can’t say that I’m very well familiar with The Fleur de Lys but their song “Tick Tock” sounds pretty good played by The Honey Pot. There’s even a great, psychy organ/guitar solo part! “Egyptian Tomb” is another song that I don’t even remember hearing before since I unfortunately don’t have any albums by Might Baby. This is pretty nice, pleasant late 60s/early 70s melodic rock music. Curved Air was rather famous in the 70s for their sound influenced by prog, classical music and fusion. “Puppets” is a rather slow, beautifully orchestrated song but probably my least favourite on this EP. Still not bad at all! And now the best piece: “I Had Too Much To Dream” is one of the best 60s psych rock/pop anthems and I just love it! So does Crystal Jacqueline, apparently, since this version sounds just perfect. The great cover art is by Dale Simpson again. What a great double seven-incher, warmly recommended.