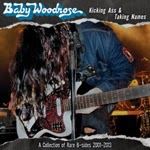 Baby Woodrose from Copenhagen has been one of my favourite psych/garage rock bands since their debut album Baby Blows Your Mind in 2001. Even before that album made by Lorenzo Woodrose by himself I was a big fan of his previous band On Trial, where he played drums. So, being a hard core fan, I of course have all the Baby Woodrose singles and split releases, but I was still very happy with the idea of releasing a compilation of rare single tracks, since they are all very good and you don’t usually listen to 7” singles that much, do you? Kicking Ass and Taking Names is a perfectly crafted compilation of those beautiful gems that have sort of been lost in the dust. The oldest tracks were recorded at the first studio session of the original full band line-up with Fuzz Daddy and Moody Guru, who are featured also on most of the other tracks. Some of the singles are now very hard to find and collectable, so this is a wonderful opportunity for newer fans to get hold of these tracks.

The compilation kicks off with “Information Overlords”, the powerful B-side of “I’m Gonna Make You Mine” released in 2007. The even more rocking and energetic “Good Day to Die” originates from Let Yourself Go 7” released on Longfellow Deeds Records in 2008. This will make you move! “Coming Around Again” is a little more atmospheric A-side from 2008 that I really like. The B-side of that single is the very simple and direct “I Feel High” that has no drums. “Making My Time” is a nice, mid-tempo garage rocker with nice organ and was released on a Greek double A-side 7” in 2009. “Long Way Down” rocks harder and faster and reminds me of some of the On Trial songs. I almost missed the orange vinyl version of Countdown to Breakdown 7” that had this as a B-side. “Double Six” is definitely one of the rarest songs here since it’s from the first single released in 2001 and limited to just 300 copies. This is rather primitive sounding caveman garage rock and I like it! “Light Up Your Mind” is from the latest Baby Woodrose single and very catchy stuff. “Bubblegum” is the B-side and sounds very 60s like The Kinks or something. The under two-minute “Too Far Gone” from the Disconnected 7” comes next and then it’s time for the Raveonettes cover “Beat City” that, to my knowledge, has never been released before! This is the only cover song on the album and it sounds wonderful. “Here Today Gone Tomorrow” is perhaps the heaviest and tightest piece Baby Woodrose has ever recorded: this sounds like Monster Magnet, even the vocals! It is from the 2005 split single with The Dollhouse. “Live Wire” from the No Other Girl single in 2006 is pounding and straight-forward, and the compilation ends with the rare Baby Woodrose ballad “That’s How Strong My Love Is” from the first single. What an album! There are still a lot of single tracks that are not featured here so maybe we can expect a sequel at one point? I really hope so, since this band really kicks ass!