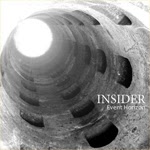 Last year’s Event Horizon is the latest offering from Italian heavy psych/prog rock trio Insider. I have previously reviewed their album Vibrations from Tapes which was a very different affair being a compilation of improvisational studio jams. This 59-minute CD includes eight quite complicated, progressive and almost metal-like instrumental compositions that are unfortunately less spacey and psychedelic but more varied and interesting, even experimental. Even though the music really isn’t that spacey and has very little to do with space rock for example, the themes in the titles are still space, gravity, magnetic fields etc., so sort of scientific… The playing and sound quality on this record that is fully produced by the band themselves is great. The guitar player Marco Ranalli also plays some cool digital and analogue synths that give some more atmospheres to the sonic texture making it more interesting and, at least for me, more digestible. Some of the riffs are quite heavy, slow and even doomy, but more often complex and progressive. The rhythm section of Piero Ranalli (bass) and Stefano Di Rito lays down some solid rhythms, while Marco adds the intricate guitar and synth stuff. The title track is a shorter, acoustic guitar interlude and then we get maybe to the albums best piece “Expansion of the Universe”. This still is closer to metal or prog than psychedelia. This is definitely not a bad album but just not trippy enough to earn my infinite love.