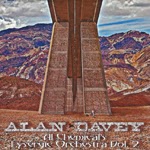 Alan Davey is still most known for being the longest standing bass player of Hawkwind but he has also released many albums as a solo artist and with his other bands like Bedouin and Gunslinger. Several years ago he released one limited edition CD-R as Al Chemical’s Lysergic Orchestra and that was a more experimental, modern electronic affair a bit farther away from his heavy space rock roots. Now he has sort of brought his alter ego Al Chemical back to life but still as Alan Davey… Okay, a bit confusing maybe, but please don’t let that stand in the way since this is great stuff! This new album is heavily influenced by Alan’s visit to Death Valley where old stories and legends and the whole atmosphere inspired him to write all these songs.

The album kicks off with a heavy space rock blast called “Goodbye Death Valley” that really isn’t that far away from his work with Hawkwind. Very driving and hypnotic, rocking stuff with nice vocals! Maybe my favourite track. “Hell’s Gate” is a much more laid-back, atmospheric and sort of weird, short instrumental, and then we’ve got the album’s longest track “Mustard Canyon” that is very electronic, ambient and modern sounding in nature. Alan really knows his way with programming, synthesizers and sequencers too… On “Badwater” he rocks out a bit more again and there’s also a bit of vocals by Alan’s artist friend Kevin M. Sommers who’s responsible for most of the cover art work on Alan’s releases. Kevin also plays trumpet on this one. Very nice stuff! “Dantes View” is at first a minimal, experimental ambient piece that gets some beat later on. The mid-tempo “Titus Canyon” sounds has a hypnotic bass line, some heavy electric guitar, synths and even wicked banjo and sampled vocals. The strange and psychedelic “Titus Canyon” is the second track with vocals from Mr. Sommers. This is sort of trip hop but in Alan’s own style. The very trippy and dark “49’ers” is based on the famous story of the group of gold rush pioneers in the 1840’s and has some spoken word by late Bob Calvert as well. “The Racetrack” is weird and sort of spooky electronica and the CD is finished with “Zabriskie Point” that cools things down in a very tranquil, airy and ambient way. Another great album by Alan, warmly recommended!