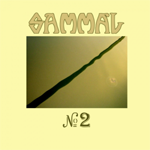 This 20-minute five-tracker is the second release by Finnish progressive hard rock group Sammal. I really loved their debut album that was released on Svart last year and sold-out pretty quickly (you can get a re-press now, though). Sammal had three unreleased outtakes from the debut album sessions, and they wanted to put them out together with a new track and an Aphrodite’s Child cover. Very cool! The new track “Vankina varisten” is mid-tempo, hard-rocking prog in the vein of Uriah Heep and Deep Purple and has some great melodies and solos and a nice groove. Aphrodite’s Child’s “Magic Mirror” was recently covered by German psych masters Vibravoid and it’s hard to beat them. Translated as “Peilin taikaa” Sammal’s groovy rendition still does the job and they have also kept some of the trippy elements which is great. I love the organ on this one! “Tuuli kuljettaa” is a more atmospheric, slow, beautiful and melancholic song that’s also very good. Maybe closer to old Finnish prog of the early 70s although there’s a heavy Heep/Purple styled boogie part in the middle. “Neito maan” is another groovy, mid-tempo piece with nice and effective chorus and faster solo section. The very touching and melodic “Tähdelle kuolemaan” is one of my favourites. This could be labelled as prog pop, I guess, and sort of reminds me of another excellent Finnish progressive band Liekki who have now disbanded. Very nice, anyway! I know some people have issues with the singer’s voice but I think it’s perfect for the music. This EP/mini album is very recommended for all lovers of progressive, 70s styled rock and pop music. I’m really looking forward to see this band live again on March 21st at On the Rocks, Helsinki.