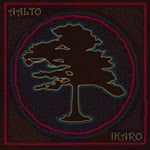 Ikaro is the second full-length by Finnish psychedelic ethno-folk group Aalto. I really enjoyed their previous album Tuulilabyrintit released in 2012 and now the band at times gets even more psychedelic and hypnotic which is great. They have taken influences from various ethnic folk music styles and traditions as well as progressive rock and jazz. The instrumentation includes for example guitar, sitar, tambura, Finnish zither, didgeridoo, clarinet, mandolin, banjo and drums & percussion. Five of the six members on this CD also sing, often several of them at the same time. There’s also some throat singing to give a nice, exotic twist.

The 52-minute album includes eight tracks. “Metsätaloushöömei” was previously released on the first, self-titled CD-R EP, but this is a brand-new version. Most of the music is mainly acoustic, but there is also some electric guitar. Nature, cosmos and dreams are some of the key themes in the lyrics that are in Finnish. The album starts off with the hypnotic, monotonous and spell-bounding title track “Ikaros”. It grows very slowly into quite intense, captivating soundscapes and then cools down again. The progressive, melodic and lively “Vapahtaja” has lots of elements from Eastern music. In the end it gets jazzier as well. Very nice! “Heijastumia” is a more laid-back, mystical and a bit Indian-styled number. “Kastepisaroita I” is very peaceful, melancholic and minimal piece with beautiful female vocals. The instrumental “Kastepisaroite II” has more instrumentation but is also rather slow stuff. “Sateentuoksuisia unia” is a nice, dreamy psych folk song that has full drum set and some electric guitar as well. Great! “Metsätaloushöömei” is a catchy acoustic folk song for the forests and also has throat singing. Very earthy and ecological message and some excellent musicianship on this one! The album ends with the 10:39 long “Kuun tytär” that begins with some didgeridoo and builds up slowly. We get some wonderful guitar, zither and clarinet melodies as well as fragile female vocals and tribal percussion etc. This is deep and primeval stuff that puts you in deep trance, lovely! The going gets more intense later on… Maybe my favourite track on this very enjoyable album. I’ve never seen Aalto live but I hope I can fix that problem tomorrow when they are playing a record release gig in Helsinki at Siltanen! Another album release party will be held on Friday at Tampere’s Telakka.