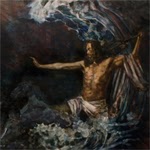 Oh yes: some more classic retro hard rock from Sweden! Old Man’s Will started in 2011 and they released their debut album in late 2013. They are apparently influenced by the old greats like Deep Purple, Led Zeppelin, Cactus, Sir Lord Baltimore and to a certain degree, Black Sabbath. They have also some blues vibes and the vocals are quite soulful. I must admit that I thought at first that the singer is female, but he’s not… I was just somehow reminded of Janis Joplin. Great vocals, anyway! As I have stated time and time again, I’m totally bored with most of the millions of bands in the 70s retro hard rock genre, but still this sounds pretty refreshing and cool. The album has 9 songs in just 33 minutes, so no extended jams on this one which is maybe only a good thing. 33 minutes of this stuff in the row is not too much. I can’t find anything really special with this album, but as I said, it sounds pretty cool and I do like it. All the tracks feel like they were written before 1975. I don’t have any favourites but there are no total misses either, so I guess you could say that this album is pretty solid throughout. It will also be released in the US next month so who knows where Old Man’s Will can end up.