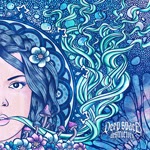 Deep Space Destructors is a psychedelic and progressive band from Oulu, Finland who combine in their music several sonic ingredients like doom metal, space rock, hard rock, post-rock etc. I don’t have their first album, but you can listen to three of the songs on their Bandcamp page, and it seems that II is a giant leap forward in every way. The album was released already over a year ago, but I got it very late. I’m glad I did since this is marvelous stuff!

Like the debut, the bands second album includes four long tracks. “Beneath the Black Star” starts off in mellow mood, but it gets more mystical and heavier quite soon. The sound quality is a lot better and clearer than on the debut, that’s for sure. There’s also some of that spacey swoosh noise that makes things much more psychedelic to the third ear. The slow drums join in before the three-minute-marker and after one minute we also get some vocals that alter between mantra-like and melodic. Great stuff! There’s also a guitar solo later on. This is not of the ultra-heavy, down-tuned doom metal variety but more atmospheric and beautiful. “Deserted Planet 2078” has a lighter, even bluesy vibe but also some heavier stuff and it starts to rock out later on. “Spacy Phantasy” is a little more progressive piece with some early 70s vibes and more space sounds. A pretty nice and varied number! The last track “Sykli” is the longest and starts off in beautiful, peaceful way. The lyrics on this one are in Finnish which gives it an early 70’s Finnish prog rock vibe. Nice playing! Also this song starts to rock out more towards the end sounding like hard rock/heavy boogie and I like it. The CD is limited to just 200 copies and comes in an amazing ecopack cover that is even more psychedelic than the music… Recommended!