Sounds of New Soma - Live at The Green Mushroom Festival 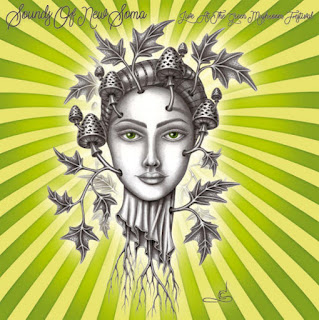 This is the first "live" album by German psychedelic neo-krautrock/ambient/kosmische music group Sounds of New Soma following their three great studio albums and one one-sided 7".  This amazing sounding LP was apparently recorded at The Green Mushroom Festival that sounds like a very cool party although I couldn't find any info from the net. Either it's the kind of fest you only hear your weirdest friends whispering about or the band dreamed the whole thing...

Anyway, what we got here are five previously unreleased tracks. I'm not sure how much is improvised on the go but there must have been at least some stuctures beforehand. This album has a less electronic, more organic vibe to it than the previous albums and I like that. Only the shortest track "Projektionen" is pure electronica with sequencers. Drummer Armin Schopper who was already featured on the previous album La Grande Bellezza is augmenting the core duo of Alexander Djelassi and Dirk Raubach again as well as "other psychedelic astronauts". The opening track "Schein" has a five-minute ambient intro until the slow drum beat begins. I really like the laid-back, hazy atmosphere of this track. There is guitar, spacey electronics and keyboards and bass bringing to mind early 70s Pink Floyd or Electric Orange. On "Om Namah" the vibe gets spacier and more psychedelic. Another slow burner with also a couple of bit heavier guitar parts to a great effect.

On the B-side "Weinende Eidechsen" is a very powerful and trance-inducing track that is probably my favourite on the album. Very psychedelic, deep stuff... After the excellent, Berlin-school-styled sequencer piece "Projektionen" the album is finished off with "Henriette Mutterkorn" that is a bit groovier, killer hypnotic space/krautrock number that moves both your brain and ass. Wonderful! Whether this LP really was recorded live or not it's a very welcome addition to the SONS album family and perhaps the best one yet. Definitely one of the best albums this year so far. There are three different, limited vinyl editions with enclosed CD as well as a separate CD release out there on 6.4.2018. Be sure to get your copy and get spaced out with it!