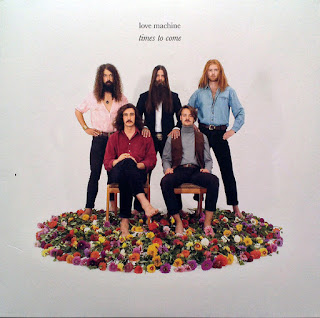 Times to Come is the third album by 60s/70s styled bluesy psych rock band Love Machine from Düsseldorf, Germany. These young hippies have now all grown tasty mustaches and also deepened their musical abilities and style. I have previously reviewed their debut Present to the Galaxy and the following Circles on the excellent Tonzonen Records, now they switched labels to Unique.

Like before, the listener is right away reminded of The Doors when the first track "Got To Love" starts to blast from the speakers. Yes, it's maybe mostly due to their deep-voiced singer. By the way, a nice addition are the backing vocals by some of their friends. Also, this time the lead vocalist at times reminds me of Johnny Cash! Anyway, the opener has a cool, sort of sunny, almost African vibe to it as well as a faster, jammy rock section towards the end. Nice! "To the Universe" is a rather mellow piece in the West-Coast style and the longer (7:51) "Blue Eyes" a cool bluesy number with some Grateful Dead styled guitar work and vibe. I like the extended ending on this one. The slow and mellow "Solar Phallus" is the track where the singer brings to mind Johnny Cash the most. There is also some flute on this one. "Visions" is a trippy, groovy instrumental jam with some analogue synth and cool solo guitar work. Very nice! The short, rather minimal title track "Time to Come" has a stronger folk rock vibe á la Donovan, and the last piece "Earth, Again" is a beautiful, soulful number somewhere in between The Byrds, Love and Jefferson Airplane. All in all, if you like late 60s/early 70s styled bluesy rock music with some slide guitar and psych vibes etc. you should check this band out. Out on vinyl, CD and digital download.