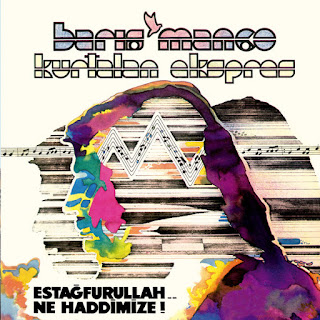 Anatolian rock/pop/folk/psych/funk legend Barış Manço released this album originally in 1983, and this CD/LP reissue was put out in 2016. To my knowledge, it was the last studio album to be recorded with his backing band Kurtalan Ekspres. I don't know much about Barış who died in 1999 or his music either, but I must say that I do have a sweet spot for Eastern/Oriental melodies and rhythms and the combination of Eastern and Western music often works really well for me. The great vocals also have a really cool, exotic effect on me.

In general, 1983 maybe wasn't the best year in music, but this album sort of lives in its own continuum of the 70s which is cool. On the other hand, the grooviest track on the album, "Aman Yavaş Aheste", is a killer, funky disco-boogie number that woud have gone down well in any European discotheque in 1983. Anyway, there are lots of different songs here, some more traditional ballad-like, some more in the rock/pop/funk vain and all with some prog/psych elements so I like it.  My favourites are the mesmerising opener "Halil İbrahim Sofrası" and the mystical last track, the instrumental "Selahaddin Eyyüğbinin Yeğeni Aslan Yürekli Rişarın Kız Kardeşine Karşı". Worth checking out!