Jess and the Ancient Ones - The Horse and Other Weird Tales 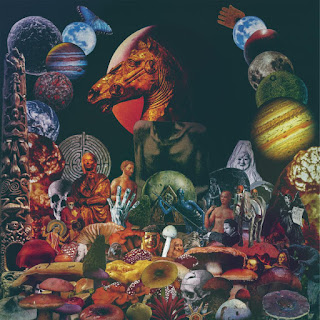 The Horse and Other Weird Tales is the third full-lenght by Finnish psychedelic rock band Jess and the Ancient Ones established in Kuopio in 2010. The band members have their roots in metal and you can still sense it somewhat, but I wouldn't still label the music they now make as metal. They have been for example touring with King Diamond and played also at Roadburn Festival, though. When they started, they seemed to ride a bit on the occult rock wagon, but it's fair to say that they don't do that so much anymore. But they are not exactly part of the psych rock revival either, I think.

My feelings about the band have always been a bit divided: you just got to love the lyrical themes of the darker side of the Aquarian age, the playing and vocals are great and at times the music really is psychedelic and transports you into some other dimension, but on the other hand, I somehow don't really get their main point. I'm also having big difficulties in taking in the psychobilly drum beats the drummer seems to be in love with. But then again, all this makes them sound pretty unique I guess. It seems to be that people either love them or don't like them at all, but I'm somewhere in the middle.

The Horse and Other Weird Tales is rather short at 35 minutes and includes nine new songs. There are only two longer tracks (over seven minutes in lenght) and the rest last from only under two to little over three minutes. So, nothing as epic and adventurous as the final track on their previous album that was over 20 minutes! And a couple of tracks on the debut were also well over the ten-minute-marker. "Death Is the Doors" starts the journey. Argh, that surf/twang/psychobilly beat almost right from the start... Well, there's more and you could say that this is pretty cool and groovy tune. The use of spoken word samples is a nice addition the band has utilised quite a lot. "Shining" is  bit heavier piece and rather fast as well. "Your Exploding Head" has a nice chorus but mostly reminds me of some Finnish schlagers or 80s Tuomari Nurmio or Kauko Röyhkä or, especially, 80s Finnish female singer Tuula Amberla. Not my kind of stuff, sorry. "You and Eyes" is a bit more melancholic and soulful piece that I like a lot. It brings to mind Janis Joplin or Jefferson Airplane. It also gets more progressive and rocks harder, which is great.  "Radio Aquarius" returns to one of the band's favourite themes psychedelics and is actually a very nice, laid-back instrumental with cool spoken samples. "Return to Hallucinate" of course continues the theme and is a catchy, up-beat song. One of the highlights! Then it's time for some hard/occult rocking with "(Here Comes) The Rainbow Mouth", pretty powerful stuff. Also "Minotaur" rocks out okay (but that drum beat again...). The longest track (7:58) "Anyway The Minds Flow" finishes off the album in a more doomy, gloomy way but also has some prog rock vibes, at least on the organ department. This track sort of reminds me of The Devil's Blood, maybe not so directly, more just the dark vibe. Again, we get some spoken word at the end. I'm sure if you liked the the band's previous output you will love this album.