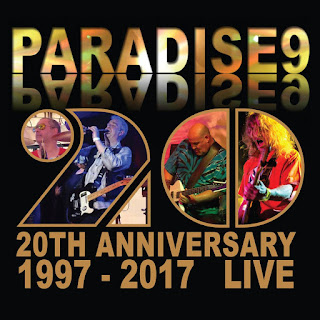 This double CD was released last year to celebrate the 20th birthday of U.K. band Paradise 9. They are usually labeled as space rock band which is fine, but actually I hear a lot of post-punk / New Wave influences in their sound as well in addition to the pure space rock sound. But hey, nothing wrong with that! Anyway, if you enjoy bands like Here & Now, Magazine, The Fall, Killing Joke etc. you definitely should like them. I have previously reviewed a couple of their releases, and am a bit late with this one. Sorry about that!

Anyway, what we have here is a cool 2CD set of live material at various festivals and club gigs in between 1998 and 2016. CD 1 is focused on recent live stuff from Blind Cat Festival and Kozfest from 2016. Most of the stuff is pretty energetic and up-beat, but we also get slower ones like the instrumental "Ocean Rise" where Nik Turner is adding some cool saxophone, like on several other tunes as well. I also really like the use of spacey synthesizers on many tracks enhancing the psych/space element. One of my faves on disc one is "Distant Dreams", a melodic, nice and dreamy piece that features Kev Ellis on harp etc. This sounds quite a lot like some of the Hawkwind or DarXtar space ballads, great! Actually, the same goes for the following song "Crystalized Moments", very cool vibes.

The stuff on the second disc comes from several gigs played around London. The sound quality is very good, like on the first disc, but maybe not perfect. "Into the Ether" is a hypnotic, danceable piece with percussion. We get some acoustic stuff with "I See You Dancing", "All Said and Done", "Bright World" and "Glow". There's also another versions of their classics "Crystalized Moments", "Points of View" and "State of the Nation" that all made appearances on the first disc. Some groovy, spacey moments in there, and Nik is also featured. All in all, this 2CD is a great celebration of the twenty years of Paradice 9 and also gives you a good overal picture of what the band is all about live. Check it out!