Seven That Spells - The Death And Resurrection Of Krautrock: OMEGA 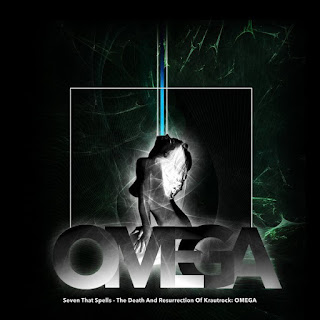 Croatian Seven That Spells led by the very cool Niko Potočnjak has been around for 15 years now and released quite a lot of albums. I've been following them almost from the beginning and also was lucky enough to see them live a couple of times at Roadburn Festival. They have a rather unique style mixing together psych, prog, space, kraut, alternative and experimental rock elements. They used to be heavily influenced by Acid Mothers Temple at one point, and also collaborated with them, but now the chaotic ATM elements are pretty much gone. Omega is the last part in The Death And Resurrection Of Krautrock trilogy that started in 2011 with AUM followed by IO in 2014.

The new album just released on the amazing Sulatron Records has five tracks. "In III" is a shorter (4:07) hypnotic piece that sucks the listener into this sonic journey. The pretty heavy, repetitive vibe and particularly the mantra-like vocals (I'm not sure about the language) reminds me of early Circle which is cool. The same goes for the rest of the album. The rest of side A of the vinyl (limited to 500 copies) is filled with the almost 19-minute title track "Omega". This is a rather progressive, adventurous and excellent composition that at times brings to mind some of the modern prog rock/metal bands like Porcupine Tree. Some great melodies and rhythms on this one.Things do also get a bit freaky towards the end which is great! "Chronos" is an atmospheric, instrumental opener for side B, and the "Future Lords" take us away into space and beyond. This is the most psychedelic track on the album, and I like the intense, driving beat and rather dark mood. The sort of weird "Out III" finishes off the album in mysterious atmospheres and leave you wondering what the hell just happened. I love it! OMEGA is another masterpiece by Seven That Spells but be prepared to listen to it several times before you really can get inside it. This is not easy listening music, but still rather approachable stuff, when you really pay attention. Great sound and musicianship, warmly recommended!