The Janitors - Horn Ur Marken 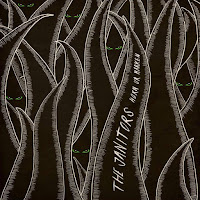 Horn Ur Marken is the third album by Swedish dark psych / post-punk /alternative rock band The Janitors. It is their statemant againts religious misdoings,  capitalist selfishness, racist idiocrasy and fascism. I'm still kicking myself for not buying the previous Cardinal Fuzz release, the 2LP Drone Head since it seems to be impossible to find in any reasonable price. Luckily I've got their previous release, the excellent 2014 12" EP Evil Doings of an Evil Kind that I also reviewed. In my review I compared The Janitors to Cult of Dom Keller, Dead Skeletons, Sonic Jesus, The Underground Youth & The Spacemen 3 and this still sort of holds.

There are seven tracks on the album. It starts off with the hypnotic, heavy, gloomy and excellent mid-tempo "Trojan Horse", one of my favourites. The slow title track comes next and it's a dark, mesmerizing trip that goes on for nine and a half minutes. "Neon Times" is a bit more energetic and percussive blast that offers no mercy or hope for the human kind. On the fuzz-filled "Blizzard" the band starts to rock out more and gets wild, but the overal vibe still is dark and hopeless. Not that it gets any lighter at any point... The droney "In the Wood" brings to mind early Specemen 3 and "Fear of All" has strong post-punk/Gothic overtunes. The album is finished with the peaceful and hazy but alarming instrumental "Alarmatica". I really enjoy this album although it certainly does not make you feel "good" in a normal way because of its dark, unsettling message and vibe but musically it gives you great satisfaction. Horn Ur Marken is out on two different vinyl editions, CD and cassette, go and get it!