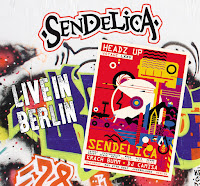 The Welsh psychedelic space rock masters just keep on putting out great stuff (around 30 releases in 10 years!). I'm glad that they do, since I now can confirm that they are one of my favourite bands. This is a limited (200 copies) CD only release that will be out next month. Live in Berlin captures the band's final gig on their recent European Spring Tour and having seen them in Finland again I can say that the band really is on fire with the new drummer Joe Caswell who gives new energy levels to their live performances. The rest of the live band still is Pete Bingham (guitar), Glenda Pescado (bass) and Lee Relfe (sax). My only complaint is that, probably due to economical reasons, they don't have synth players or singers on their European tours and that treat is reserved for the U.K audiences only. But hey, these four guys are enough to make an unforgetful evening of great live music, I assure you!

Not ofter do bands start their gigs with a 20-minute track but Sendelica effortlessly pulls that off with their 2016 masterpiece "Cromlech Suite", entitled here "Chronicles Chronicles" like the album. Amazing! The semi-Pink Floyd cover "Set the Controls for the Heart of the Buddha" is next and we are pulled into a mysterious, psychedelic and sort of Oriental world. I love Lee's sax especially on this one! A new track that they come up with at rehealsals is called "Lost City of Cardiza" and it takes of where the last track ended. A shortened version of "Not the Time for Salads" from the new 2LP Lilacs Out of the Deadlands comes next and it takes us to the "Baalbek Stones" that works out excellently live. Then it's time for a extended, 20-minute space rock monster "Dancing to Dante's Inferno" that reeks of Hawkwindian space dust. Lots of cool jamming on this one! "Shades Revisited" opens up in calm and beautiful way but gets pretty progressive and busy later on. What a great way to end a live CD! The sound quality is crystal clear so the only thing I'm missing here is a vinyl edition. Get this CD before it's gone!