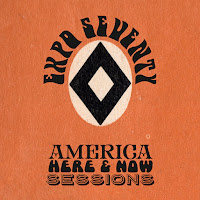 Expo '70 is a very prolific experimental drone/abstract/psych rock outfit who have released around 50 albums since their interception in 2003. The improvised music of this free-form band led by Justin Wright can be rather electronic or more rock oriented like this album. America Here & Now Sessisons were recorded in summer 2012 and was intended for a collective album with another band but this never materialized. Essence Music from Brazil released the recordings last December on limited vinyl and CD. The CD has a whole different art work by Justin himself as well as an eight-minute bonus track that didn't fit on the vinyl version. This release includes a short-lived line-up with two drummer (David Williams, Mike Vera), Justin Wright on guitar and synthesizer and Aaron Osborne on bass.

"First Movement" builds up slowly into a full-blown, slow psych rock jam that goes on and developes for over 20 minutes. This is rather heavy and mind-blowing stuff and I really enjoy the hypnotic, cosmic vibes! The even longer "Second Movement" is more droney while Justin plays the synth. The two percussionists still get a cool, tribal groove together at some point, and later the track speeds up and gets more intense only to chill out again in the end. The CD bonus track "Third Movement" is more minimal in nature and not really essential, although still very nice. I really think I should check out more of Expo '70's stuff since this blows your mind. There are still some copies left of this CD limited to just 200 as well as a couple of the rare black vinyl edition at the band's Bandcamp site.