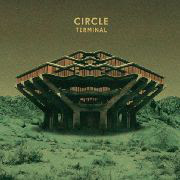 It has been two years since Finland's (or the world's) best band Circle released their previous studio album called Pharaoh Overlord. Of course, their parallel band Pharaoh Overlord put out an album called Circle at the same time. Confused yet? You definitely should. Anyway, live album 6000 km/h Part 2 and the Kummitus 7" were released last year to keep the addicted fans happy. Circle has been famous for the fact that anything can happen during their gigs and this also is true on their live and studio releases. You can never quite know what to expect. They might have done a punk album, a krautrock album, a metal album, a noise rock album, a glam rock album, an acoustic folk album, an experimental album or what ever. If you count all the side-projects as well, the possibilities of different musical styles is endless. At the moment I do feel that Terminal is one of their strongest moments.

The album starts off with the almost 13-minute "Rakkautta Al Dente". It begins with a heavy, hypnotic riff that makes you bang your head. At first, the screamed vocals sound like black metal for a while. After the two-minute-marker we get some cool Mika Rättö vocals and then the track gets more exploring and jamming. Towards the end the hypnotic basic riff returns to a great effect. Excellent! The pounding title track "Terminal" is like a mix of Hawkwind, Stooges and MC5, of course with a distinctive Pori twist.  You just got to love stuff like this! "Saxo" begins with a minute of simple harmony vocals and then starts to rock out sounding like a big boatful of intocicated vikings attacking and pillaging your home village. Very powerful stuff. "Imperiumi" is another heavy but a bit more progressive piece that sounds like classic Circle material: motorik, weird and melodic at the same time. The next track "Kill City" has a sort of 90s heavy psych rock vibe and I most certainly enjoy it a lot. The end is very peaceful and pretty for a nice contrast. "Sick Child" ends the album with English vocals by guitarist Janne Westerlund. This one will put you in trance, and in the end it gets more chaotic and noisy. What can I say: I just love this album. One if not THE best release this year.