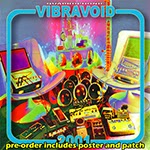 What can I say about Vibravoid from Düsseldorf, Germany? Since I bought a 2LP version of their debut album 2001 when it originally came out in 2001 on Nasoni Records (the first CD version being released a year before on Triggerfish Music), I've been deeply in love. Who else would put out a limited edition of their debut with two differently coloured LP's with exactly the same songs and in same order but the other vinyl playing from inside groove out? These guys must be very high and cool, I though, and still do. The album included such instant psych hits as "She Is Just 13", "Lovely Lady Deb O'Nair" and "Ballspeaker" and definitely got my attention. Since then, I have bought all their releases immediately when they became available, and I'm so glad that I have since their limited edition stuff is nowadays sold-out already on pre-order and you can expect to pay astronomical prices on Ebay etc. I have also been lucky enough to see the band's highly psychedelic live show and met them personally on several occasions the first time being the Nasoni Records 10 Years Birthday Party in Berlin in 2006, and my mind is permanently blown. This band has had an integral part in the revival of the original psychedelic era of the 60s with also some influences of kraut rock and Spacemen 3. My favourite band of the modern age!

What I have here is a very cool promo edition of the re-mastered and expanded 2CD and 4LP versions that will come out around the 8th of May with loads of extra goodies, especially if you pre-order which is highly recommended. Both formats will of course include exclusive bonus tracks. Even this promo copy is loaded with cool inserts, a booklet and optic art gizmos, so I'm really excited! Stoned Karma also threw in a bonus live DVD... This is quite different to receiving a dull download/streaming link that I mostly just forget about! This is the real deal, music from the aether having taken a physical form. This is the way to treat a reviewer! The original album included nine songs, and the 2CD first offers all those in remastered form and in slightly different running order starting with "She Is Just 13" instead of the experimental "Three Minutes for Free Tibet". These tracks now sound a lot better than the original versions. Then there are alternative/demo versions of "Lovely Lady Deb O'Nair", "Mystery Ship", "Ballspeaker", "Psychodrome" and "Three Minutes for Free Tibet" that are very interesting to hear, since they are rather different. A real treat is the 2015 version of "She Is Just 13" that finishes off the first CD and will also be included on a forth-coming Stoned Circus Radio Show - 20th Anniversary compilation LP.

The second disc starts with seven live tracks recorded at Swamp Room Happening 2001 in Germany. I'm really digging these early live recordings with great sound quality! "Three Minutes for a Free Tibet" is used as an intro, and then the band blasts off into "She Is Just 13" and "Ballspeaker". After that it's time to chill out with "Mystery Ship", and then they freak out with "Astronomy Domine" by Syd's Pink Floyd, who clearly are one of the main influences of Vibravoid. Great! "Vivid Vision" rocks hard and the long "Void Vibration" is dreamy, celestial, spacey and divine as usual. Then we get four early demos from the 90s! "Genesis of Dreams" is a short experimental instrumental, "Psychodrome" sounds pretty much like Spacemen 3 with very different vocals, "She Is Just 13" is pretty rough and primitive and the earliest demo from 1993 "Journey to the Centre of the Sun" lasts for 23 minutes and is a real trip also including some sitar! 2001 is one of the best records ever released and this new expanded edition is essential for every self-respecting psychedelic rock collector. Don't miss out!