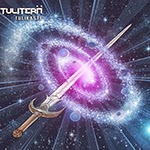 This is the first full-length album by Helsinki based instrumental, psychedelic space metal band Tuliterä. Some of the tracks have been released before on the band's two EP's but these are new versions and edited down a bit. The line-up has gone through some changes since the band finished this CD: they have dropped the keyboard player and also have a new drummer making them tighter live than ever. Anyway, let's focus on the album here.

A new track "Percolator" starts off the album in a rather atmospheric mode with trance-inducing programmed stuff, space sounds and beautiful guitar. It does get heavier towards the end, though... A great intro that builds up the excitement! "Alpha Blade" must be one of the oldest TT tracks the band still plays live, and it sure makes the crowd wild every time! This piece really rocks through space and time and has rather progressive parts as well. "Jagat" is another track from the 2008 Alpha EP and it's also fast and energetic, but not that complex. This makes you bang your head! "Firedew" is a new track that begins in a tranquil, somehow Twin Peaks inspired mood, but soon they add the metal guitars and drums, and then things get more progressive and adventurous. There are some great melodies in this one, and in the end everything cools down again. "Cetus" is the shortest track on the album at only 2:41, but it's still long enough for the boys to create very cool mental spacecapes. Originally on the EP it was the first part of  the dreamy, psychedelic and mysterious"Voidborn", one of my favourite tracks that has Jaire from Octopus Syng on sitar to add a certain amount of mysticism and Eastern vibe. Some of this reminds me of the third and last album by Kingston Wall, so I'm in heaven... "Star Rodeo" is a fast, tight, furious and pretty short (4:18) heavy metal onslaught with some cool and fluent solo guitar work. "The All-seeing Delirium" (originally from Alpha EP) is the longest track at over 14 minutes and it's one of Tuliterä's master pieces if you ask me. The majestic melodies, powerful riffs, hypnotic electronics and pounding rhythms make you dizzy, and there's also plenty of spacey, ambient landscapes in the middle. Wow! "Menticide" begins in the Ozric Tentacles style but gets heavier and darker. Phew... The last minute or so is just weird effects. I'm really happy that the band succeeded in making this great sounding full-length after a bit of bad luck. They are on fire with the new line-up so support these great musicians and buy their album and go and see them live when you can! Their next gig is this Saturday at Galaktus Festival in Helsinki. Hopefully, Tulikaste will also be released on vinyl later on...