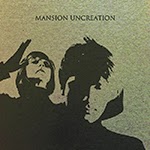 This 36-minute 12" is the third release by Finnish occult/doom/psych band Mansion. I guess this four-tracker released already in December 2014 could be called as a mini LP. The clear vinyl limited to 100 copies came with a cool glow-in-the-dark slip mat, but is of course already sold-out. You can still purchase the black vinyl version limited to 250 copies and both versions also include the tracks on CD and come with additional inserts. Very nice!

The disc starts off with the pretty slow, doomy and heavy "Child Preacher".  I love the dark melodies, powerful chorus and vocals on this one! The atmospheric "Uncreation" is the longest track at 12:51 and it starts off very slowly and quietly with quiet organ sounds. The guitar riffs remind me of old Candlemass which is never a bad thing... Excellent vocals again! "I Am the Mansion" is at first just dark, cool synth/organ stuff but starts to rock slowly after one minute. Another slow, gloomy doom track with great chorus. Later on there are also some faster NWOBHM styled banging, cool! The album is finished with the nine-minute "Divining Rod" that has a mysterious, heavy, dark and sort of psychedelic vibe all over it. This one has some great solo guitar work as well. What an excellent ending for this superp mini album! Can't wait for the debut full-length that should be ready soon...