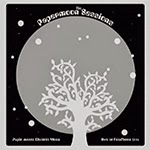 Last year's Roadburn Festival treated all the fans of psychedelic, instrumental, kraut/space/stoner rock oriented jam rock really well: not only did we get to hear a set by Sula Bassana (Germany) and TWO sets by Papir (Denmark), there was also a live set by The Papermoon Sessions, where Papir and two out of three members of Electric Moon (Sula and Lulu, 2/4 of Sula Bassana live band) joined forces with the added bonus of synth master Mogens from Øresund Space Collective at the Afterburner on Sunday! Needles to say, I was really looking forward to all these shows and enjoyed them very much. Papir, Electric Moon and Mogens had already had one jam session together in Copenhagen, which spawned the excellent studio album The Papermoon Sessions in 2013, and this was the second time they played together. Considering that, it's amazing how well they linked together, must have been telepathy in the ether! So, there were two guitarists (Sula also played some Casio and effects), two bass players (Lulu using more effects), the drummer of Papir and Mogens on synths. What a combination!

The album is comprised of two massive, over twenty-minute-long improvisational jams, that really blow your mind and take you to outer space. The first one is called "Powdered Stars" and that's a very suitable name I tell you... Nicklas from Papir plays more solo guitar and really flies high, while Sula mostly creates some heavy, fuzzed-out, psychy guitar layers. Lulu plays distorted, hypnotic and rather minimal bass lines like usual, which works great with Christian's more complex, cleaner bass. Christoffer is a superb, creative drummer and master Mogens takes care of the spacey synth sounds. Superb! "Blazing Milky Way" (another great track title) starts off with subtle, spacey and tranquil doodling, but grows gradually into amazing heights, and then cools down again during the last five or so minutes. Amazing stuff! The CD is already available for example from the Sulatron Records online shop, the limited vinyl version will be ready next month. Don't miss out on this one!