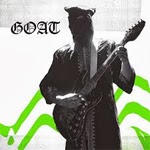 Goat from Sweden has gained quite a lot in a relatively short time. Their debut 7” Goatman (with the goat cover art stolen from the classic Bathory debut album!) released in February 2012 on UK based Rocket Recordings was and instant underground hit and sold out in an instant. The full length World Music was released six months later and was absolutely one of the best albums that year and got them lots of exposure and praise all over the place. The LP version has been released eight times so far so it really has sold quite well. Since then there have also been two remix 12”’s and another single Dreambuilding/Stonegoat in 12” (Sweden) 7” (USA & UK) formats. The band has played live on many important festivals like Roadburn (one of the highlights for me!) and toured around UK, Europe and the USA. Not many bands release a live album after just an album but that’s exactly what Goat did last December!

This CD/2LP includes 65 minutes of live versions of their album and single tracks recorded July 27th 2013 at Camden’s Electric Ballroom in London. Their unbelievably groovy, catchy, magical and psychedelic combination of African voodoo beats, dirty late 60s/early 70s fuzz guitars % bass and typical Swedish folk melodies, hypnotic psych/kraut rock vibes and high-pitched, raw female vocals spiced with killer solos, some saxophone etc. is just so tempting and powerful that you either dance like crazy or don’t know what hit you and blew your mind. Some of the songs are somewhat extended from the studio versions and have some jam feel which is great. All the songs from World Music are played, but in different order and Dreambuilding and Stonegoat are placed in between. I just can’t name any favourites since I love the whole album very much! The sound quality is crystal clear and you can hear all the instruments and vocals just perfectly, so the gig really was recorded and produced really well. You can also hear the audience at times and they really seem to be into it as well! Definitely one if not THE best live album last year, although you are missing the great visual performance that this band also delivers live. Just buy this album and whatever they going to put out next and most importantly go and experience this band during their live rituals!