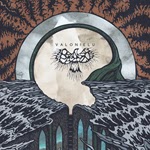 Valonielu is the third album by Finnish Oranssi Pazuzu. The guys combine hypnotic, cosmic and psychedelic rock to dark and gloomy black metal. They have also released a splendid slit with Candy Cane. I’ve been a fan since the debut album, although I don’t usually really care for this kind of growling/shrieking vocals anymore. For some reason the vocals of Oranssi Pazuzu don’t really bother me, maybe I’m just used to them or maybe it’s the fact that they remind me of early Bathory that’s the kind of original black metal that I still can stand? Whatever the case, the main thing that appeals me with this band is their cosmic, spacey and spooky atmosphere full of ancient Lovecraftian monsters, altered states of mind and dark parallel universes. And they also write great songs! I like the down-tuned, brutal guitar riffs, hypnotic, early Circle-like beats and eerie keyboards and spacey sound effects. Not all the guitars are totally distorted and heavy, but they also use lots of other effects which is very cool. There are some weird, surreal, abstract and experimental vibes that remind me of Voi Vod as well. The overall vibe is very gloomy and spacey. I also really like the lyrics that are in Finnish, although it’s sometimes hard to figure out what the singer is singing. Valonielu also includes a more ambient, tranquil but still very dark instrumental called “Reikä Maisemassa” (“A Hole in the Landscape” in English). My favourite is the heavy rocking hypnotic mid-tempo piece “Olen Aukaissut Uuden Silmän” (“I Have Opened a New Eye”) that reminds me very much of Bathory, especially during the parts with blast beat. Two of the six tracks are very long, the cosmic, stoned and doomy “Uraanisula” at 11:52 and the mostly atmospheric and experimental “Ympyrä On Viiva Tomussa” at 15:10. If you want something heavy, weird, dark, scary and spacey, this album is for you. The album is also out in the US on 20 Buck Spin.
www.oranssipazuzu.com
Lähettänyt Unknown klo 10.36