This Is Ghost! Country: S/T 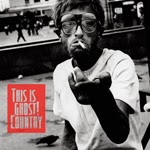 This Is Ghost! Country is a new band from Germany. Their sound is quite hard to pin down but they have elements of punk, hardcore, sludge metal and stoner as well as some heavy metal. This is energetic, raw, heavy and in-your-face kind of stuff. They still have some clever hooks and tricks as well as slower parts so it’s not just straight-forward blasting. Before this debut album released on CD and vinyl last year the band has released one CD EP in 2010.

The 33-minute album has eight tracks on it. The mid-tempo “Smooth Unfoo” starts the disc with heavy riffs and dark moods. Nice, fuzzy and dirty sludge rock with cool vocals. Although being rather slow stuff, “Dumbfucker” gets more aggressive and the singer starts to scream more. The ending is closer to doom metal. On the noisy “Ztupe / Red Area” the band speeds up into standard punk pace and this track will for sure make the audience pogo during the live performances. “The God Replacement” is slower stuff again and there’s even some blues influence I think, not unlike something that you might hear in the Southern sludge rock circles. “Tekken” starts off peacefully but gets heavy later on. “Big Fat Killing” is a just a minute-long fast punk eruption, and then it’s time for “Black Trekken” that has some The Obsessed influences and maybe even a bit of AC/DC? The album is finished with the over eight-minute-long “Bootes” that is the most experimental and psychedelic track on the album. Very stoned, dark and heavy shit. This is a pretty interesting album so check it out if you are into this kind of heavy, sludgy and harsh stuff.