Mansion: We Shall Live 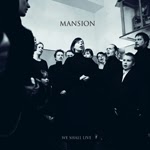 Mansion (shortened from I Am Mansion) is a mysterious new female-fronted dark rock/metal band from Turku, Finland. Their image and themes are lent from Finnish apocalyptic and ascetic, Christian-based cult called Kartanolaisuus (Kartano meaning Mansion in Finnish). Its founders were two women, Alma Maria Kartano (1885–1953) and Amanda Matilda "Tilda" Reunanen (1894–1965) and the cult had some pretty weird, cruel and perverse rites and customs. You can ask if this band would have ever materialized without occult bands like Sabbath Assembly, The Devils’ Blood or Jess and the Ancient Ones, but I don’t care. At least they have a clearly Finnish theme and they actually sound really great.

This self-released EP that sold-out very quickly (both the 12” vinyl and the initial CD-R version!) has four very well produced tracks. “Mother’s Burden” starts off in peaceful, melancholy mood, but starts to rock out after one minute. I really like the singer and everybody plays really well too. This is a great, atmospheric, melodic and rather long song that turns into doom metal later on. “We Shall Live” has a heavy boogie rhythm that sort brings to mind Uncle Acid but this of course isn’t that dirty and psychedelic stuff. The vibe gets very dark towards the end, and I like this one as well. “Sorrowless” is maybe closer to NWOBHM but there’s nothing wrong with that. Nice guitar melodies! “Slumber Sermon” is probably the most mysterious and magical of all the tracks and pretty gloomy, doomy and heavy as well. The preachers of Kartanolaisuus used to fall into a slumber state before starting their powerful, apocalyptic sermons, so that’s what this is all about. Very strong stuff and my favourite song on this EP! I’ve only seen this band live once (supporting the mighty Lord Vicar) but I really enjoyed myself so I can promise that the Roadburn audience will be spell-bound next year. Let’s hope that there will be a re-issue of this EP and that the band will also record a full-length soon since this is very cool stuff. In the meantime, you can download the EP from their Bandcamp site and try to catch them alive…