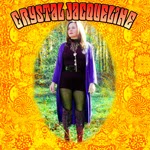 Crystal Jacqueline is a British singer with a beautiful but powerful voice and this is her debut solo album following a great cover single on Fruits de Mer that I reviewed in September. All three tracks from the 7” are also included on the album, which is great. She is also member of a band called The Honey Pot and aided on the album by his band mate Icarus Peel who’s responsible for the orchestration and production. Great work, Icarus!

The 49-minute album has 12 rather short tracks influenced by rock, pop and folk music from the 60’s to this day. Most, if not all, of the tracks have clear psychedelic elements, which of course makes the album very interesting to me… The title track starts off the disc with a nice, heavy glam rock/boogie vibe. “A Fairy Tale” is a very nice, melodic and driving cover by Second Hand and I really like this version. Another cover also included on the 7” is the dark, dreamy and haunting rendition of The Rolling Stones masterpiece “Play with Fire”. Wonderful! “Dream I” is a great, melancholic but strong original and “Who Do You Love?” a pretty, peaceful but sad ballad. “Alice” is one of the most psychedelic songs and has nice organ and acoustic guitar among other things. Welcome to Wonderland… “Cousin Jane” (The Troggs) is the last cover single track and quite minimal and short but still nice. Crystal’s lovely voice has lots of room to shine here, like on the following piece “Fly a Kite” that’s pure magical psych bliss and also rocks out later on including a great guitar solo. “By the Way” has lots of acoustic guitar and folk elements and somehow reminds me of Renaissance like the next song “I Break”. Maybe my favourite song is “Light Is Love” that after it’s psychedelic, ambient beginning starts to rock with a groovy beat and hypnotic vibe. This brings to mind old UK psych pop/rockers The Magic Mushroom Band… Amazing! It’s nice to cool down with the album’s final piece, the beautiful pop song called “Sundown”. Sun Arise is already available on CD from Mega Dodo’s Bandcamp site, for example. I’m so glad the Kickstarter campaign for this album was a success so it will be also released on coloured vinyl next year! The great cover art is by the brilliant Dale Simpson (remember his wonderful psychedelic drawings in Freakbeat magazine?).