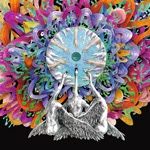 Domovoyd is a psychedelic stoner/doom metal band from Finland playing very hazy, druggy, heavy, effect-drenched and spaced-out music. I have previously reviewed their EP that already showed a lot of promise. Oh Sensibility just recently released by Svart Records on CD and vinyl is their debut full-length, and a very good one. A lot of bands nowadays say they play psychedelic rock or pop or psychedelic metal but these guys really are psychedelic in a mind-blowing way which I love.

After the ambient and spacey “Introduction” these young stoner warriors rush into the heavy-bounding head-banging heaven called “Incarnation” that brings to mind Electric Wizard in a positive way. “By Taking Breath” is equally heavy and crushing, but sees the band going into more esoteric and hypnotic directions not unlike their label mates Dark Buddha Rising. There’s a lot of stuff happening in over nine minutes, phew… “Lamia” is a slower, doomy piece with some weird Oranssi Pazuzu –styled surf guitar (well not exactly surf but maybe you know what I mean). The vocals are harsher in this one, and the going gets groovier along the way. Sounds a bit like Church of Misery, actually, until the very atmospheric end part. My favourites are the two last, very long tracks, though. “Effluvial Condenser” is a really trippy and psychedelic song, where the guys really have found their own thing. The at first whispered mantra suits the hazy and other-worldly atmosphere very well and the track just keeps on growing and growing until your head explodes. Great! The last four minutes are just smoke vapours and echoes of your lost sanity. The last track “Argenteum Astrum” is named after a mystical order founded by Aleister Crowley, so you can maybe figure out the mood of this 16-minute esoteric occult monster. The first three minutes are quite atmospheric and dark and then they kick on all their fuzz pedals and rock out. Excellent! In the middle they cool down again for a while, but there’s another heavy attack until the laid-back but dark and hazy ending. The guys have done a very good job on their debut album, definitely one of the best Finnish albums this year. Support the psychedelic youth!