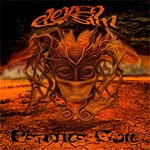 Eleven Sun is a Finnish stoner rock/metal band whose first, sold-out EP Absinthe Sky I reviewed a couple of years back. The band has been together since 2008. Fertile Soil is their second EP and was released early 2013 so I guess I’m a bit late on schedule again. Sorry about that, boys… Anyway, this band is one of the best in this genre that seems to be getting more and more popular in Finland. Not that these bands sell millions of records or even get record deals, but there seems to be more and more young stoner/doom bands and also an audience for them, although it’s mostly an underground thing. This 30-minute CD EP is limited to 200 copies and has four tracks. First, we’ve got “Follow the Smoke” that’s quite good, slow, bluesy and atmospheric stoner rock. Some of the vocals are quite harsh, but usually more on the melodic side of the spectrum although still powerful. The song gets heavier towards the end. “Flies” rocks faster and brings to mind Fu Manchu at first. Nice riffs! There’s also a guitar solo jam in there. The title track “Fertile Soil” is a heavy, groovy mid-tempo stoner rock track somewhere in between Monster Magnet and Soundgarden. “Greenspiracy” is the longest track at 11:35 and starts slowly in a very hazy and stoned manner. There’s also some synthesizer in there, I think. When the track starts moving slowly I’m reminded of Amorphis a bit, although this is definitely more stoner oriented. Rather melancholic, strong and heavy stuff with nice vocal melodies. My favourite song on the EP! This is a quite moody piece but gets more intense later on. Great! Check this band out if you’re into heavy stoner rock with metal and psychedelic leanings.