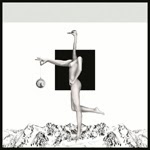 This is sort of strange, dirty stoner/rock’n’roll/disco act that was formed in 2011 after a lot of booze and bruises. They are apparently from Germany but nobody knows for sure… The main emphasis is to get the people dancing by combining heavy stoner rock to disco beats and synthesizers etc. Sounds like a cool idea! And it sort of works too. This vinyl/CD/digital album is their first full-length and they have previously released one 12” (Dance! Or! Die!, 2012). There are five members in this band, Astro Mo (vocals), Jimmy Glitschy (bass, synth), Gelenk Steffen (guitar), Rummel Dörte (drums) and Scooter Ronny (frontdancer – yes, this guy dances frantically at the front of the stage!). There’s a certain amount of humor in this band for sure...

This 39-minute album has 10 tracks on it. Things start off with the up-beat stoner/desert rocker called “Motorpsyche” and I like it. On “Dance! Or! Die!” the disco influences start to shine through, there’s even some vocoder vocals which is cool! The guitars are heavy, though, and this kicks ass. “Swallow” is pretty standard stoner/riff rock but not bad. It reminds me of Fu Manchu, QOTSA and other bands like that. I don’t care much for the dirty rock piece “Long Gone Dead” that also has harmonica. “My Baby” is on-your-face up-tempo stoner rock that will make people wild live I’m sure. “Fuzzmatazz” starts off with some feedback fuzz guitar and then a heavy, great mid-tempo riff begins. This one has a disco-like beat at times, but otherwise its good stoner rock. “We Need More Disco” focuses more on the disco vibes and has some synths but it’s still rock with a catchy chorus. The most disco-oriented (and also the most interesting…) track is “Stoned Uff’m Dancefloor” and this one even has some hit potential I think… Very cool and funny stuff! “Killswitch” has a disco beat too and this is heavy, pounding track that rocks hard. “Slowrider” is slower stuff as the name suggests, and has a sort of bluesy vibe that I don’t like that much. I wish these guys would focus more on combining disco with stoner as I think there’s potential in there. They can also just play tight heavy stoner stuff but the basic rock tracks are a bit boring. They have an interesting concept that should be developed further.