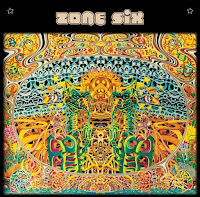 German psych/kraut/space/impro rock band Zone Six was formed almost by accident when Liquid Visions couldn't play a gig they were asked to play and bass player Dave Schmidt (later also known as Sula Bassana) formed a new band for the gig. The idea was to play long, trance-inducing space rock jams and that's what they did. Hans-Peter from Liquid Visions was playing guitar, Dave bass and ex-Liquid Visions drummer Claus the drums. The first Zone Six album was recorded at rehearsal place on 8-track and later Dave added some overdubs at his home studio. A very limited tape edition was released at the first show in September 1997. Next year female vocals were added to the recordings and the first Zone Six CD was released on Early Birds. This album was in my opinion one of the most psychedelic released in the 90s and has gained cult status ever since. To celebrate 20 years of Zone Six Dave decided to reissue the album this year. Rather than re-releasing the CD he has put out the original instrumental version that has so far been unavailable to the big public!

The album is divided into 13 individual tracks, some of which are only short interludes. My promo CD-R copy is just two, side-long tracks, so I won't even try to tell what part is going on at what time. All the music just flows continuosly for the whole one-hour-trip, so that won't be really necessary either... All you need to know is that this album will take you on a journey to some strange, multi-coloured psychedelic world and you just might never want to come back. Just close your eyes and let your mind wander in these wonderful, strange, alien soundscapes. I must say that even as I really liked the Early Birds CD version, the music does work better without the vocals. I also like the occasional dub influences and very experimental parts, so this is not only rock music. The sound quality is also just superb, especially for a 20-year-old rehearseal recording. Wonderful! What's perhaps the best thing here still is that the album is now available on vinyl for the first time ever, so vinyl freaks get you copies fast before they're sold-out! Also available on CD.