Samsara Blues Experiment - One With The Universe 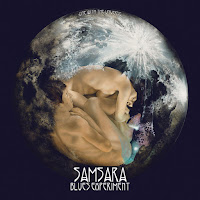 Samsara Blues Experiment was formed in 2007 by ex-Terraplane guitarist Christian Peters. Their 2010 debut album Long Distance Trip has already gained a sort of cult status in the heavy psychedelic blues/stoner rock circles and you can expect to pay over 100€ for the original green limited edition LP. After that debut the band has released two studio albums and one live one as well as a couple of EP's. After a few years' break (while Christian was doing solo stuff as Surya Kris Peters and getting deeper into Eastern spirituality) Samsara Blues Experiment is back and they sound better than ever.

The new album released in April (yes, I'm very late again, sorry...) includes five long tracks. First we've got the long opener "Vipassana" that takes us out for a meditative flight on mystical, ancient flying machines. This track is a real trip and brings to mind 90s Finnish cult psych/prog rockers Kingston Wall although this also has some heavier parts. Excellent! "Sad Guru Returns" starts off with a spoken sample and then the heavy blues rocking begins. Some killer stoner riffs as well as more atmospheric stuff in this nice instrumental track! "Glorious Daze" is a more laid-back, slow tune that gets you into dreamy, meditative state while it grows. This has some similarities with Colour Haze as well as classic hard rock bands I guess and also some sitar and electric piano etc. Cool! The longest piece is the 15-minute title track that starts as very melancholic and instrumental. After some cool, psychedelic jamming things get more intense and there is also some vocals and then they turn then song into blues and then into groovier rocking. The album is finished with the emotional and pretty progressive "Easter Sun & Western Moon" that has some nice keyboards and organ as well. The track gets heavier along the way. This is a great ending for an amazing, powerful album that comes highly recommended. Get it on vinyl, CD or digital!