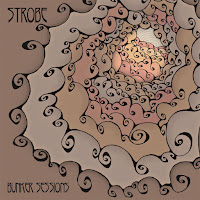 This album just released on Sulatron Records is every Strobe fan's dream come true: a previously unreleased studio album from 1994! Formed in 1990 Strobe was one of the best UK based indie/neo-psych/space rock bands and influenced by bands like Loop and Spacemen 3. The three-guitars/bass/drums lineup created a full, hypnotic, swirly and psychedelic wall of sound that appealed to psych heads, but somehow the band pretty much remained in the underground until their demise in 2001 and never really made it big. Especially their three first albums, See Beyond the Sun, Maya and The Circle Never Ends were true masterpieces and highly appreciated by the psych rock afficiendos. The original vinyl copies are also rather rare these days. Later on their sound shifted closer to mainstream and I lost interest. Anyway, in 1994, after recording the magnificent classic The Circle Never Ends, the band got an idea to record a studio album with a live feel and no overdubs. They went into Bunker Studios in Bedford and recorded six songs, but these recordings were somehow left unreleased until now. Two of the tracks ("Chameleaon Earth" & "Opium Dreams") were, however, re-recorded after a few years and released on their later CD releases.

The album starts off with the over-ten-minute, hazy "Sun Birth". It's a pretty laid-back and dreamy, repetative instrumental piece that grows very slowy towards the end. "Into Your Skin" is a shorter, more aggressive, Loop/post-punk-inspired track with vocals. More chord changes on this one than usual... "Obsession" is one of those two-chord miracles that keep you interested with their tension. Some cool guitar stuff on this one, and yet again I'm reminded of some of the post-punk or even Goth rock bands. These guys must have listened to Joy Division? Probably my favourite is "Chameleon Earth" that has a dark, hypnotic vibe and this time I'm even reminded of The Cure when they rock out more. I wonder why I never got this feeling listening to Strobe before? Maybe it's because these sessions are rawer and without the most mind-expanding soundeffects. In any case, I really enjoy what I'm hearing here. The eight-minute "Opium Dreams" has a female quest singer with wonderful voice and begins in a very beautiful, soft way. This track gets you in a hazy trance and is another highlight for sure with a more heady vibe. "Sun Death" closes this great album in hypnotic, mesmering manner including some very powerful triple guitar work. Cool! This album is now out on limited vinyl and CD and has cover art by Lulu, the bass player in Electric Moon and Zone Six. Get it now!