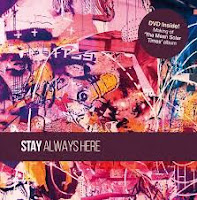 Stay is a Spanish (or should I say Catalonian?) psychedelic indie rock/pop band from Barcelona. They have been around for over ten years now and released several albums and singles. This is their fourth 7" for Fruits de Mer / Regal Crabomophone. This new 7" EP includes five tracks starting off with the excellent title track from their latest album The Mean Solar Times that I reviewed last year. "Always Here" was produced by the Britpop guru Owen Morris (Oasis, The Verve) and it sure sounds great.

The other tracks are a superb version of "Every Christian Lion Hearted Man Will Show You" by The Bee Gees, rocking "Where Have All The Good Times Gone?" by the Kinks and a remix of their original "You Know It's Right". The original version of this melodic, very Byrdsian track was first released on The Mean Solar Times album, but this version benefits form the added guitard from Andy Bell (Oasis, Ride). All in all, Stay is an excellent band that puts together influences form the original 60s psych pop and 90s Britpop to a great effect. This 7" also comes with a 50-minute DVD about the recording sessions of their latest album, a nice bonus touch.