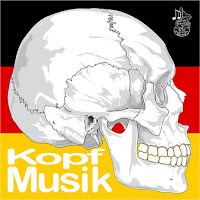 This massive 3-CD-set is a dream come true for all krautrock fans with no vinyl playing option! Kopf Musik compiles together most (but not all) krautrock tracks covered by modern bands and released on vinyl by Fruits de Mer. The first CD is filled with tracks from the 2LP+7" Head Music (crustacean 36), so there are classics by Neu!, Kraftwerk, Amon Düül I, Can, Popol Vuh, Tangerine Dream etc. performed by the cream of the psych bands of today like Vibravoid,  Earthling Society, Vert:x, Dead Sea Apes etc. Frobischer Nick's Ash Ra Temple cover "Schizo" is a new mix and all the tracks sound awesome. No fillers here, I can tell you! Also loving the funny intro by krautrock legend Eroc.

The third CD here includes just three tracks but they are very long. Brainticket's "Brainticket" is perfect material for ambient/trance legend Astralasia and this version even makes you want to dance. This is also around nine minutes longer than the version previously released on Postcards from the Deep 10 x flexi 7" compilation... Ax Genrich helped out by Sunhair offers an live version of his own "Spaceship Memory" only previously available on The 14th Dream of Dr. Sardonus promo CD-R. The Bevis Frond jams for 24 minutes along with Electric Sandwich's "China". This was originally released as part of the Side Effects box set that had eight bands to perform one side-long cover each. Personallyl I never get tired of hearing Nick Saloman play solo guitar, so a lovely ending to a brilliant triple compilation. A must have for all those krautheads who missed the original releases and also a very nice (and handy) item to have even if you didn't. This was initially sold only at the Fruits de Mer gigs and festivals this Summer and Autumn but if you're lucky you can get one of the last ever copies on sale online (for non-UK customers, check out Heyday Mailorder.