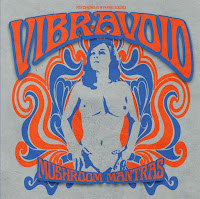 Vibravoid from Düsseldorf, Germany has been one of my favourite psychedelic artists since they released their debut album 2001 at the dawn of the new millenium. Getting inspiration from the best mind-blowing music and magic potions in history the band now also uses ancient Hindu mantras on a couple of tracks to get an extra kick to their super groovy,  ultra-dimentional soundscapes. This time there are no covers of 60s masterpieces but only original, very high quality material. All the songs are also previously unreleased, not like on the previous album Wake Up Before You Die released just ten months ago. This is super great for a fan-boy like me, especially since all the new material is highly potent and mega-trippy!

"Om Gang Ganpataye Namah" starts off the celebrations of the Elysian fields. This is an instant, groovy mushroom hit song I tell you! "You will find if you just look around..." One of the best tracks the band has ever produced! "The Legend of Dr. Robert" tells a story of a bit different doctor but at least his patients saw the world very differently after treatment! Another killer fuzz psych rock classic is born. "Echoes of Time" is even fuzzier, rawer hard psych number that rocks like hell and, like the previous songs, also has a catchy chorus. There's also a spacey interlude. Excellent! The up-beat hit cavalcade just continues with the little bit shorter, groovy Indian styled "Sarveshaam Svastir Bhavatu" and "Apollo69" gets the space rock gear on. After five such brain-frying psych rock monsters your mind really is in need of a chill-out and the beautiful "Purple Pepper" offers just that. Nice. I can't believe this was just the A-side of the LP so far! So much great stuff in there.

The B-side is filled with the 20-minute "The Orange Goat" that at first has field-recordings like bird-song, more sitar and loads of other droney soundscapes and hypnotic, repetative mantras. After the three-minute-marker the track starts to take more form and what a pretty, dreamy and mellow that form is! Just close your eyes, relax and let your mind wander is all those marvellous places. Amazing! The CD version of this total mind-blower of an album also includes older (1992!) bonus tracks "Krautfactor I-III" and they are weird, ambient alien transmissions from a far away galaxy. You've been warned. You can pre-order the album from the Stoned Karma Records website right away so why wait until it's sold out? Be a cool cat and get the limited vinyl release with sweet bonus stuff!