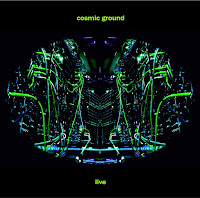 This 2LP is the first live release by Electric Orange's Dirk Jan Müller's old Berlin-school styled kosmische electronic/ambient project Cosmic Ground. In the spirit of Tangerine Dream and Ash Ra Temple Dirk creates amazing sonic landscapes with mostly old synthesizers and sequencers and before this he has released four studio albums and one 12" EP. Live was performed and improvised in late 2016 at two festivals in Netherlands and Germany and in addition to Dirk (Modular Systems, Mellotron, Roland RS-202, Roland System 1, Nord Wave/Electro) it also features guest Horst “Sunhair“ Porkert (Roland SH-101, Moog Sub-37, Minikorg, Effects) who has also released the album on CD on his Sunhair Records.

There are four side-long tracks on the album plus a fifth download bonus track. "Dark Enck" and "Cairo Grind" are both mostly based on pulsating, hypnotic mid-70s Tangerine Dream styled sequencers but there are also lots of other cool effects and synth layers. It's hard to imagine that these tracks were improvised live since they sound so cool and great! "Unground I" is more ambient, dreamy drone until the sequencers take over in the middle and things get more active. "Unground II" stays droney all the way and has some darker vibes as well. The bonus track "Anomaly" is slightly shorter (at 16:54!) and has more sequencers again. Not bad at all! It's great that this kind of music is still played live at this time and age, must have been quite an experience especially with Kosmic Klaus and his Solar Slide Show! There are two limited vinyl editions of this album you can choose from if you hurry up... Warmly recommended!