Anton Barbeau - Heaven Is in Your Mind EP 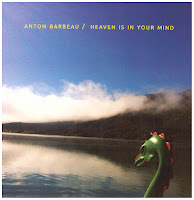 I've been following Ant's career since his King of Missouri album on Woronzow in 2002 (and I think I've said it everytime reviewing his stuff for some strange reason). Anyway, this psychedelic indie rock musician originally from California mostly lives in Germany now and makes music with some helping hand from others. He's got one of those unique voices that you immediately recognize and also a good taste in music. You can check out my review of his latest (at least 12th?) album Magic Act (2016) over here.

Anyway, this is his second 7" EP on Regal Crabomophone and offers three great cover songs and one previously unreleased original. Traffic's 1967 psych classic "Heaven Is in Your Mind" starts the EP and I'm in heaven not really knowing where my mind is. This has enough elements from the original but also a certain modern touch to make it sound really interesting and valid somehow. Great! I would be very scared to put my own song to an EP along with three more or less famous songs but Anton's "Secretion of Water" stands out on its own among the other jewels. A rather laid-back, melodic and emotional song with just enough mind-blowing elements. I'm not sure if I have even ever heard Big Star's "September Curls" but I guess I should. At least this little power pop tune works out well performed by Mr. Barbeau. Then things get a bit more rocking with an interesting version of David Bowie's "Scary Monsters". Very effective, even the programmed drums. Another nice and cool release by Anton, still available from Fruits de Mer and some retailers!