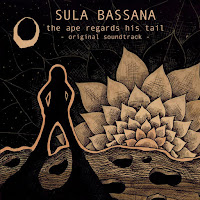 We Sula Bassana fans are of course familiar with his more atmospheric, ambient side with several albums in this style being released since 2003's Sulatronics CD-R. I have also always thought that his soundscapes are so visionary and cinematic that they would fit perfectly for a cool sci-fi movie or something. The Ape Regards His Tail still actually is Dave Schmidt's first soundtrack album and the music was written for a movie by the same name made by Michael Yates. These eight instrumental tracks form a very cosmic, hypnotic, rather minimal arch made with synthesizers, string-ensambles, Mellotron, organ, electric guitar and electric piano. I've only seen the trailer of the actual movie, but it might be available somewhere over the internet. It really seems interesting!

Okay, but back to the soundtrack album. It starts off with the very mellow "Beginning", "Dreams" and bit darker "Rocks". The longer "Desert" also includes delay-guitar to give some more texture. Really nice and spaced-out, it makes you feel like you're hallucinating in a wast desert all by yourself! "The Sand Waves" trusts more on old sequencers and has a very cool, trippy Tangerine Dream kind of cosmic vibe. One of my favourites for sure! After "Rocks 2" we've got the albums longest track "Water" and boy aren't we thirsty by now... This is soothing but still somehow menacing and dark track. I love the very effective, melancholic Mellotron harmonies towards the end. A masterpiece! The album is suitably finished with the nice little electronic piece "Ending" that offers a flash of hope, maybe. This is an album to listen to on good headphones in a dark place with your eyes closed for sure. Magnificent! Only available on CD at this point, but there will be a 2LP version on Pancromatic during this Winter. Check it out!