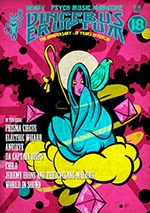 This great Italian heavy psych music magazine celebrates its 15th anniversary so congratulations to Davidew and crew! This time we have a little bit thinner mag (just 30 colour pages) due to the enclosed CD to manage the shipping costs, but that's okay. The CD in question is Essay on a Drunken Cloud by Italian heavy psych/stoner rock group Anuseye. They might not win the best band name competition, but this album that was previously available only on limited vinyl edition really deserves a wider audience. But let's get back to the CD later on!

So what do we have in the brand new mag? As usual, interviews with both more seasoned veterans of the scene and some not so familiar acts, lots of reviews and and an interview with a record label boss, this time Wolf from the great German record label World in Sound. I got to admit that this time most of the featured bands were at least relatively unknown to me, so lots of new stuff to read and learn. Prisma Circus is a new, young band from Barcelona, Spain playing bluesy hard rock and  so are Child from Melbourne, Australia. Druggy and wicked doom masters Electric Wizard don't really need any introductions at this point, but I got to say the interview with Jus Osborn is very interesting and also touches some fragile areas... Da Captain Trips is pretty cool Italian band dedicated to long instrumental jams that we all should check out more closely I think. If some of you are old enough to remember the Italian stoner/psych rock band That's All Folks! (check out their Psyche as One of the Fine Arts album!) that was active in 1990-2002, you might remember their guitarist/singer Claudio Colaianni who now has the band called Anuseye with Antonello Carrante (drums, percussion, Moog, keyboards) and Michele Valla (bass) and is also interviewed in this issue. That's All Folks! were also later connected to a band called Atomic Workers, worth investigating as well... Anyway, the enclosed Anuseye album really kicks ass including a good mix of fuzzy stoner and desert rock, psych rock and vintage hard rock all played with lots of emotion and balls. Great stuff! This is the first time I remember reading about a band called Jeremy Irons and the Ratgang Malibus but I bet I will be hearing about them in the future. The informative but to the point reviews include bands like L'Ira del Baccano, The Spacelords, 1000Mods, Fungus, Hot Lunch, Vibravoid, Fatso Jetson & Herba Mate, Electric Moon, Seven That Spells, Sendelica, John Garcia and even three from Finland: Harvest Bell, Deep Space Destructors and Octopus Syng which is nice! It's also very intriguing to read about the World in Sound label. The art is excellent as always so just do yourself a favor and order this issue with the great CD!