Monster Magnet: Milking the Stars: A Re-Imagining of Last Patrol 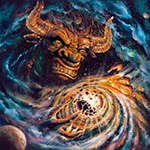 As the title suggests, Milking the Stars is some kind of a re-imagining of the previous studio album Last Patrol by the psychedelic stoner rock veterans Monster Magnet. Their main man Dave Wyndorf wanted to make a more psychedelic, sort of 60s styled alternative reality version of the album and I got to say that he's done a great job at it. This is not merely a lame remix that someone else might have ended up with. There are four new tracks, lots of different new recordings and arrangements to the old songs as well as two high-energy live tracks to close this excellent trip.

The new instrumental "Let the Circus Burn" starts off the album.  The basic riff might sound familiar, but the vibe with all the organ, spacey effects and mind-blowing guitar is pretty unique... I'm already loving this album! "Mindless Ones '68" is a new rendition of one of the best tracks on Last Patrol and I must say I prefer the new version. More organ and psych vibes in the mix again! "No Paradise for Me" is a more garage styled, creeping re-working of "Paradise" and works out great. One of the highlights for me is the fast and furious "End of Time (B-3)" that now has much more Hammond organ. A brand new track "Milking the Stars" is a slower and more atmospheric, great piece that gets heavier and pretty psychedelic and hypnotic later on. Wow! I didn't particularly dig "Hallelujah" on Last Patrol and "Hallelujah (Fuzz and Swamp)" is not that much more interesting I think. Some swamp blues vibe might still be needed on a MM album, I guess. "I Live Behind the Clouds (Roughed Up and Slightly Spaced)" sounds very good, though. A new track "Goliath Returns" is a massive, repetetive instrumental piece that only lasts for three-and-a-half minutes but does the trick. The chilled out "Stay Tuned (Even Sadder)" really is sadder than the original with all the Mellotron and spacey sounds sounding just wonderful. "The Duke (Full On Drums 'N Wah)" is of course a re-working of "The Duke (of Supernature)" but this time with full drum set and more wah guitar. Not that different in vibe, but very nice. The fierce live version of "Last Patrol" kicks ass in the MC5/The Stooges style and is also very psychedelic, and the Donovan cover "Three Kingfishers" (live as well) is a suitable ending for a great album that has a nice flow and lots of little details to get into.  It might be a good idea to re-imagine some of the other Monster Magnet albums as well like Power Trip! Just an idea...