Various Artists: Postcards from the Deep 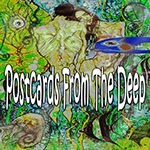 Now this is something special... Keith from Fruits de Mer had a crazy idea to put together a box set of post card singles (the ones that were produced in Poland in the 60s and in some other places even now...) with today's bands covering raw freakbeat gems from the 60s. This proved to be a difficult task, so now we are getting ten one-sided flexi singles AND ten matching postcards instead! All art is by the very talented Mick Dillingham. Since the sound quality of the flexis still isn't perfect, the cool box set also includes a CD of all the ten tracks. But since were are talking about the strange and wonderful Fruits de Mer land here where anything can and will happen, some of the versions on the CD differ from the ones on the flexis... This is also the 2015 of FdM, it's just not called that. Confused yet? You should be.

Anyway, what we have here is ten marvelous, hard-hitting 60s freakbeat/garage psych/surf etc. tracks played by some of the best possible choices there are at the moment. The Luck of Eden Hall starts off the game with Count Five's "Psychotic Reaction" and I don't remember the band ever playing this raw, energetic and brutal sounding stuff. Get psyched up! The Loons do "Celestial Empire" by Dragonfly and this is excellent, authentic 60s garage psych stuff with rough fuzz guitars as well. The Crawlin' Hex is a new band by Earthling Society's Fred, and their rendition of "I'm A Living Sickness" (Calico Wall) is just as sinister and gloomy as you might expect from him. Superb! The instrumental "LSD" (The Pretty Things) sounds VERY 60s played by the The Thanes, what an excellent, lysergic job! Satori's "Time Machine" gets a treatment by The Blue Giant Zeta Puppies and we are rocking and rolling in outer space. The Past Tense perform a raw and phased version of "Soul Fiction" (The Hippies), and Schizo Fun Addict's version of The Sorrows song "Take a Heart" is pure early acid freakiness. Crystal Jacqueline brings us back to Earth a bit, but with a very nice touch with "You Just Gotta Know My Mind" (Dana Gillespie/Donovan). If you have ever wondered, what Brainticket's organ-driven mind-fuck "Brainticket" might sound played by Astralasia, you will now find out... Just be careful not to loose your mind on the journey. Finally, Icarus Peel gives us a groovy and hard-rocking version of "The Avengers' Theme" (Laurie Johnson) and I'm in fuzz psych heaven. Believe me, you need to get this box!