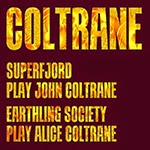 Okay, another great Finnish band makes its debut on Fruits de Mer... And I just might have had something to do with it! Superfjord is a new psychedelic band project by Jussi Ristikaarto (ex-Kevin) with a little help form other seasoned Finnish indie rock musicians. They released their superb debut album It Is Dark, But I Have This Jewel earlier this year, and you can read my review here.  I've also seen the band live two times so far and they have blown my mind to pieces. One of the best tracks on the CD is absolutely their version of John Coltrane's "A Love Supreme", and when my old favourites Earthling Society released their spacey version of Alice Coltrane's "Journey in Satchidananda" on their latest, amazing album England Have My Bones (check out my review here.), it was a match made in heaven in the fevered brain of Fruits de Mer's Keith and I couldn't agree more.

Jussi made a new, hallucinogenic intro to "A Love Supreme", so this is not exactly the same version as on the album. Anyway, this version takes you to places that you haven't even dreamed of before. There's some killer psych guitar, hypnotic bass, cool percussion, soaring keyboards, lots of mind-expanding effects and also very suitable spoken word about freeing ourselves from the ordinal reality. It really works! Seven and a half minutes of pure magic. Also Fred from Earthling Society came up with a pretty different rendition to the one released on the album. This "Cosmic Joy Mix" really is even more psychedelic, spacey and esoteric and lasts over eight minutes. Very uplifting, very trippy and spiritual and I love it!

To take things even further into the cosmos, all of the 700 copies of this 33 rpm EP come with a free 70-minute CD including lots of other treats! They were not included in the promo package so I can't comment much but the short edit of Astralasia's remix of "A Love Supreme" that's available on YouTube sounds just celestial. There's also a live version of the same track, VHSHead remix of "Journey in Satchidananda" plus new recordings by both Superfjord and Earthling Society so you can be sure to get multiple times your money's worth when you order this thing! This MUST be one of the most important 7" releases this year.

This is an early version of the track: