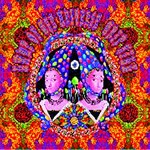 This is the first CD release on the previously vinyl-only Clostridium Records from Germany and limited to 500, hand-numbered copies. I've been a big fan of New Zealand-based Lamp of the Universe since the very beginning. Craig Williamson's one-man psychedelic, Eastern-tinged hippie acid folk project has always been able to transport me into other dimensions and I'm always ready for some more tripping. For this split release he has donated one long (21:47), floating and cosmic piece called "Domain of the Buddha". The track was recorded already in 2006 but it doesn't matter since Craig's music is timeless and infinite. This is a highly meditative and hypnotic piece with acoustic and electric guitars, bass, light percussion, flute, mind-expanding space effects, drone and some astral chanting and most definitely does the trick. Just close your eyes and let the gentle waves of this celestial music touch your soul. Totally amazing!

I'm not that familiar with the home-made neo-psych act Trip Hill form Italy, but I do know that's it's also a solo project by Fabrizio Cecchi who has released some great, limited and sought-after LP's since the late 90s. He starts off with a short experimental "Intro", before "Bright Spring" gives us sweet 60s Elevators vibes. Fabrizio is helped by Andrea Papi on drums on this track. I like the fuzzy guitar solo towards the end, very nice! The instrumental "Raining Metallic Mushroom" begins with some weird organ, but then we get some hypnotic, folky acoustic stuff and later also some distorted lead guitar and drums. "I Need Someone" has more melody and song-structure and sounds pretty 60s again. A great song! "Driving Over the Rainbow" is a more atmospheric, beautiful song that gest more psychedelic with some backwards guitar and stuff. Cool! The CD ends with "Outro", an under-two-minute-long experimental lysergic soundscape. Wow... What a great split release with mind-melting cover art by Dale Simpson and vinyl freaks: don't worry, a limited vinyl edition is also on its way!