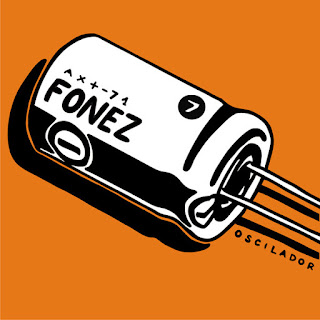 FoneZ is a cool modern post/space/krautrock band from Córdoba, Argentina, and as far as I know, Oscilador is their first full-length album to be released on CD. Unlike most of the South American bands that I've heard recently, they don't rely on heavy, distorted guitar riffs and crushing rhythms. Their thing is neat, spacey synthesizers, dreamy soundscapes and hypnotic, motorik beat and I like that.

Most of the seven tracks on the album are instrumental, or almost instrumental like the very nice opener "AX100". This one reminds me of Finnish band Avaruuskorpraali Paha Hirvi. "Mezcia" is another hypnotic synthesizer-driven krautrocker that also has vocals in Spanish. "1° De Mayo" is a little slower, has some guitar melody and is closer to some of the post-rock bands. "Grober" is a short, spacey kraut/synth piece that rings to mind Kosmischer Läufer or Eat Lights Become Lights and "Hidro" continues the hypnotic going. Th almost nine-minute "La Visión" is a dreamy, droney and hazy song with soft vocals and strong Spacemen 3 vibe. I like it a lot! The last track "San Pedro" is a really cool, psychedelic, atmospheric and trancey piece that I love. This one gives you a clear vision for sure... Oscilador is a highly enjoyable, well produced album and my only complaints are that it's not (at least not yet...) available on vinyl and it's a bit short at around 30 minutes in length. Check it out!