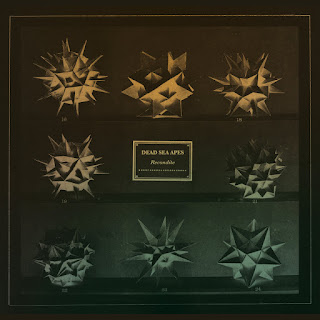 Manchester's experimental psych rock heads Dead Sea Apes are back and this time with a 80-minute 2LP compilation album. They've been around for almost nine years and released quite a lot of stuff so the timing is good. The actual 2LP (300 copies only) includes 11 tracks and there are three more coming up with the download code. Luckily this is not your usual "best of" collection of album tracks but includes a couple of different versions and rare various artists compilation tracks of originals and covers etc.

The album starts off with the dubby "Tentacles (Version)" featuring Adam Stone on narration. This is a pretty hallucinogenic ride and it's good to hear some human voice in the usually instrumental music of D. S. A. "Coronal" is a mesmerizing, hypnotic and dark piece originally from the Stay Holy! compilation released on Cardinal Fuzz in 2015. "Planet V" is a slow, bluesy and heavy psych jam previously only available on a download compilation. On side B we've first got "True Believers (version)", and those of you who have the For Nepal benefit compilation album have heard the original version before. This is seriously mind-fucking and hypnotic, slow piece that has both easier and very heavy parts. Wow! The energetic and powerful cover track "Land of the Sun" features Gabriel Minnikin and has some krautrock vibe but has similarities with The Heads and stoner rock. The track is taken from the marvellous Keep of the Grass compilation on Fruits de Mer Records and is originally by Alexander Lee "Skip" Spence (Moby Grape). Excellent. Then comes the peaceful and atmospheric "The Recognition", one of the tracks I had never heard before.

On side C "Universal Translator" is taken from the limited Ptolemaic Terrascope compilation Paper Leaves. It's rather ambient at first but gets heavier and more intense... "Lupine Wavelength" starts off in a peaceful manner but rocks out more before the four-minute-marker, like mix of Bardo Pond and Colour Haze. Those who are lucky enough to have the Magnetic North compilation have heard this already. "Rückstoss Gondolière" (Kraftwerk) is from the Head Music krautrock cover compilation and I really enjoy this version. "Rethreads" is an experimental and psychedelic broadcast only track that I'm happy to hear for the first time. "Vamos Compañeros" is another krautrock homage originally put together by Harmonia and Brian Eno in 1976. This version is from the Kosmimische Musik download compilation and it's really nice to have it on vinyl too! Two of the download bonus tracks are cool remixes and the third one a live track. All in all, this is marvellous compilation with stuff from various sources. Somehow all the tracks work together and it's great that even if you have all the band's previous vinyl releases there's new stuff even for the fans. Recondite also is a great introduction to Dead Sea Apes for the previously uninitiated.