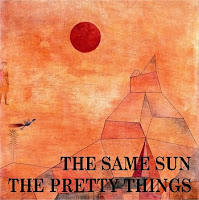 The Pretty Things are of course one of the most legendary survivors of the 60's UK r'n'b/beat/mod/freakbeat/psych scene and, as it happens, Fruits de Mer boss Keith's favourite band. The Pretties are still going strong and I must say that their performance at Roadburn Festival in 2013 was one of the best and most memorable that year. I will always remember when I wished Dick Taylor a great gig just when he was going up from the backstage area to stage and received a heartly smile and a very polite English thank you... What a great moment!

Anyway, what we have here is a four-track 7" EP. Things (!) start off with Keith's fave song from the new album The Sweet Pretty Things (Are In Bed Now, Of Course...). "The Same Sun" is a really nice, mid-tempo hard rocker that brings to mind their Parachute album a bit. I also love the vocals that really give some perspective to being a human being. It doesn't matter where you are on planet Earth, it's still the same Sun we all see, although it is seen through different eyes. Great vocals and solo guitar work as well! Yes Keith, you were right: this IS a single track for sure! The other studio track is the wonderful "Renaissance Fair" originally released by The Human Instinct in 1968. The original 7" is now very collectable and expensive and it's easy to understand why! I love The Pretty Things version too, of course. On the B-side we've got two raw and energetic live tracks somewhere from the late 60s: "She Says Good Morning" and "Alexander". I wish I could have seen the band back then but I wasn't even born yet! Great stuff.