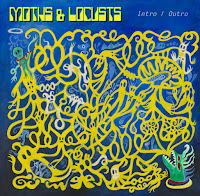 I found out about this great Canadian band last year when their second album Helios Rising was released. I was so convinced that I just had to get their debut album Mission Collapse in the Twin Sun Megaverse as well. That was another killer slab of vinyl! This band had something different going on, something of their own. Unlike so many other bands riding on the psych rock bandwagon Moths and Locusts did indeed sound original and different. There were also elements of indie rock and punk that I usually don't really care for that much, but this band made everything sound great. You can imagine that I was really looking forward to their third album Intro / Outro and oh buy how pleased I'm now that I've got it!

This album sees the band going deeper into the space/psych rock realm still keeping some of their great melodies and catchy songs. The music is now much more trippy, spacey and hallucinatory, which is just perfect for me. They have not lost any of their originality, but I am sometimes reminded of bands like Lumerians making hybrid babies with Chrome. There is a powerful, otherwordly experimental vibe on some of the tracks like "Hymn to Hathor". The album starts off with the hypnotic and mid-tempo "Acid Cloud (Part 1)" that gets more intense little by little. I like the use of wordless female vocals on this one and a couple of more. You can also hear some proggy flute on some tracks, for example. Some of my favourites are the heavy "Strange Space" and the krautrock / stoner hybrid "Acid Cloud (Part 2)" that also gets rather heavy and simply fucks up your brain. There are also some beautiful, celestial moments like the instrumental "Scream" and semi-acoustic "Roadside". But everything sounds at least a bit weird and twisted, believe me... "He Who Has the Most Strings" includes one of the dirtiest bass sounds I've heard for a while and the weird, experimental last track "Martian Sunrise" sounds exactly like its title suggets. This album might not be for everyone, but for me it's one of the best in 2017. Check it out if you dare!