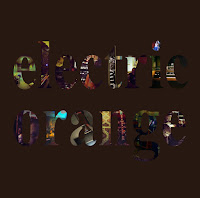 Electric Orange from Germany have been celebrating their 25th birthday in 2017 and this massive 3LP box set / 2CD full of previously unreleased studio material is the highlight of the year. I've been a big fanboy of their cosmic, psychedelic krautrock sounds since the beginning and I'm happy to say they have only gotten better and better along the years. The 3LP version has one long track on each side and the 2CD has one more track that is also available on the download of the vinyl version.

The album starts off with the 23-minute "Continuum" that gives us a flight to some spacey alternative universe through a warmhole. It's a very trippy, hypnotic mysterious ride that I enjoy very much! "Under the Nun" is a bit shorter at 16 minutes, and has a cool laid-back groove going on until things get pretty weird and experimental. There is some more grooving later on, though. The 2CD and download now continue with the ambient piece "Gnosis" where tons of sacred information is being transmitted directly into your brain. "Misophonia IV" is another rather atmospheric, laid-back number but also has a tribal beat later on. "Misophonia V" pretty much continues the journey and I'm somehow reminded of Pink Floyd's live show in Pompeii although the sound is more modern here of course. "Faint" builds up slowly and turns into a real mind-bender with groovy rhythms, cosmic synth layers and electronic sounds. It even rocks hard at the beginning! Wow. It's nice to have some more guitar in the mix for a change. The last track "Residuum" is very ambient and floating for the first eight minutes or so but slowly grows. What can I say, these guys really know how to transport the listener into some strange, far-away galaxies. Just take it easy, pay attention and surrender to the cosmic captains. One of the best albums this year for sure!