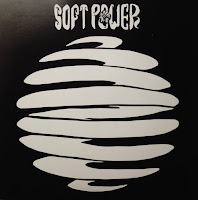 Soft Power is a Helsinki-based psychedelic prog/jazz/folk/rock band who have been playing together about five years now. I've seen them live a few times and have enjoyed myself very much. I have not heard their limited tape from 2015, but this single released late last year is just wonderful. The A side "Sleeping City" is a heady, hypnotic and dreamy mid-tempo pop/rock song somewhere in between Velvet Underground, and Spacemen 3. The vocals are rather low in the mix but still audible, and the sitar played by Jaire Pätäri from Octopus Syng adds more trippy, Eastern vibes. Great song and very well produced as well!

The instrumental "Morning Mist" is rather different in style and brings to mind late 60s/early 70s Scandinavian jazzy progressive rock bands. It also includes electric piano and sax adding very nice, laid-back and sunny atmospheres. Cool! There are two different versions of this single, both highly limited. The marbled orange vinyl with hand-made textured cover is limited to just 50 copies and already sold-out, but you can still order the "standard" black vinyl edition (100 copies) from the band's Bandcamp site. Recommended!